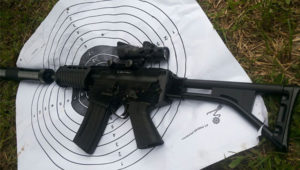 On June 9th, 2016 the state-owned Indonesian defense company PT Pindad launched four new small arms systems. Included was a new rifle named the SS2-V7 Subsonic. This new rifle is based on the standard issue SS2 which was introduced to the Indonesian military in 2006. The SS2 is an entirely Indonesian designed weapon and was developed to replace the SS1 which was a licensed copy of the Belgian FN-FNC. The SS2 uses a gas piston design similar to the Kalashnikov.

The SS2-V7 Subsonic appears to have a much shorter barrel with a larger suppressor attached at the muzzle. No details yet have been released about the ammunition but the rifle appears to be chambered in 5.56. Shooting a subsonic 5.56 round in a standard AR-15 platform requires the need to cycle the action manually due to the lighter load not being able to throw the BCG far enough to eject the spent case and pick up another round. Some modifications with springs and gas systems have been attempted in an effort to get the Ar-15 to cycle reliably using subsonic ammunitions and these modifications have been met with varying degrees of success. The modifications will invariably require a heavier than normal projectile to increase gas pressure. No word has been given yet as to the type of ammunition the SS2-v7 would use but assuming a 75 Grain bullet you can expect the following trajectory numbers (Courtesey of JBM Ballistic Calculator):

The table shows a trajectory numbers that are similar to a subsonic 300AAC bullet, however energy delivery tells a different story. Energy at the muzzle is at best equivalent to a standard FMJ 380ACP round. This is less than half the energy delivery of a standard 300AAC cartridge. For close in operations a suppressed SMG like the MP-5 SD may be a be better choice. However, this setup might be a good choice if an entry team member is carrying magazines loaded subsonic and supersonic which could easily be switched out after taking out sentries and/or lights in a stealthy manner. 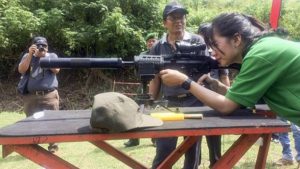 12/1/2022 - Hunting ammunition is in stock and currently shipping within 1-2 business days. 308Win subsonic backorders continue to be filled ASAP. Dismiss