Email Me When Available We will inform you when the product arrives in stock. Just leave your valid email address below.
August 23, 2017Allison Platt

An article featured on TFB told the story of an American father and son trying to build one of the unicorns of the firearms world: the Russian VSS Vintorex. This is quite significant due to the fact that these fully automatic and integrally suppressed rifles, developed by TSNIITOCHMASH (Central Scientific – Research Institute for Precision Machine Engineering) and manufactured by Tula Arsenal never found their way into the US. The rifle fires a 9×39 cartridge with a subsonic 250gr projectile that was developed by Nikolai Zabelin. Great looking rifle! 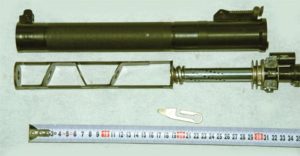